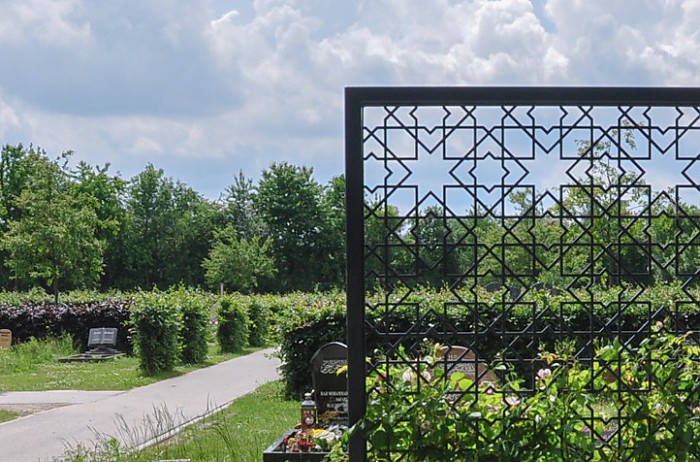 Muslim burials in cemeteries in Germany

Organised by the Arbeitsgemeinschaft Friedhof und Denkmal e. V., Central Institute and Museum for Sepulchral Culture, Kassel, in cooperation with the
Academy for Islam in Science and Society (AIWG), at the Goethe University Frankfurt am Main

Many Muslims who die in Germany are still transferred for burial to countries from which an earlier generation immigrated. One reason for this is German burial law, because it is difficult to reconcile with a large part of Muslim burial rites. This concerns, for example, the wishes for a coffinless burial, for a burial within one day, for digging the grave oneself and for eternal rest for the grave. However, more and more Islamic cemeteries or burial grounds are now being established in Germany to give Muslims the opportunity - at least to a large extent - to be buried according to the rules of their religion. Cemetery administrators are then called upon to make the coexistence of different cultures compatible for all concerned. At the conference for cemetery administrators, experts will provide an insight into the religion of Islam and the cultural and social developments related to the burial behaviour of people of the Muslim faith in Germany. In addition to theological and religious-legal aspects, reports from burial practice will show exemplary approaches to solutions in cemetery-legal conflict areas for large and small towns.

If you are unable to attend after registration, please inform us at least seven days before the start of the conference. Otherwise we will have to charge you the full fee. You have the possibility to name a substitute participant at any time and free of charge name.

Here you can download the registration form (in PDF format).

On October 25, 2019, the HeilsameAbschiede (Healing Farewells) congress was held in Cologne, Germany, to discuss how cemeteries could be established as an attractive "space for mourning." Following the congress, measures were planned throughout Germany to put the results of the conference into practice. The majority of the projects could not be realized. But in the state of Hesse, the working group Hessendialog, initiated by Stefan Friedel, Treuhandstelle für Dauergrabpflege Hessen Thüringen, took up the impulses. The idea arose to examine at so-called pilot cemeteries to what extent essential aspects of dealing with mourners could be incorporated into the operational processes of the burial grounds.

The administrations of three cemeteries of different sizes agreed to carry out the project.  At the cemeteries in Frankfurt, Offenbach and Heusenstamm, an attempt will be made to develop a new self-image for dealing with mourners among those involved in cemetery operations. The conference will provide criteria to consider when launching a project that aims to better meet the changing needs of mourners and thus increase the acceptance of cemeteries.

Finally, a look at other project ideas that have developed from the "Space for Mourning" project is planned.

Already in 2016, the Hessian Association of Towns and Municipalities, in cooperation with the Hessendialog in the Network Cemetery and Dr. Martin Venne, conducted a structural data survey in connection with the inventory and development in the field of cemeteries in Hesse. The result was an inventory and the determination of reliable data material, which made it possible to show corresponding developments. The results of a structural data survey conducted by the Association of Towns and Municipalities of North Rhine-Westphalia will be presented this year.

In addition to the "Model Cemeteries" project, these surveys of existing data form a basis for creating strategies for the value and further development of cemeteries, in order to bring the cemetery back into the consciousness of the citizens as part of the municipal provision of public services and infrastructure.

That was the Graveyard  Administrator Convention

Ecology as a chance for the cemetery

October 8, 2019
The topic of neo-ecology is currently one of the so-called megatrends. Against the background of a generally increasing awareness of the need for a responsible use of the earth's resources, it is high time to ask what can be achieved and changed in this respect in the cemetery. In view of the importance of the topic, it is not really a big deal that the cemetery is well placed in terms of its public perception to show that it is on the cutting edge of environmental awareness.
We are interested in the importance that nature can have on the cemetery for mourning. Furthermore, we would like to know what insights nationally and nationally active institutions can provide for practical nature conservation in cemeteries. What projects in terms of biodiversity and material awareness are being developed in the areas immediately adjacent to the cemetery – i.e. for grave planting, grave signs and burials? Can an environmental management label for the cemetery make a difference? How can the experience of nature be communicated didactically in a cemetery-specific way? In the end, you will be asked again: Is there anything remarkable about your cemetery that can be reported about environmentally conscious action?