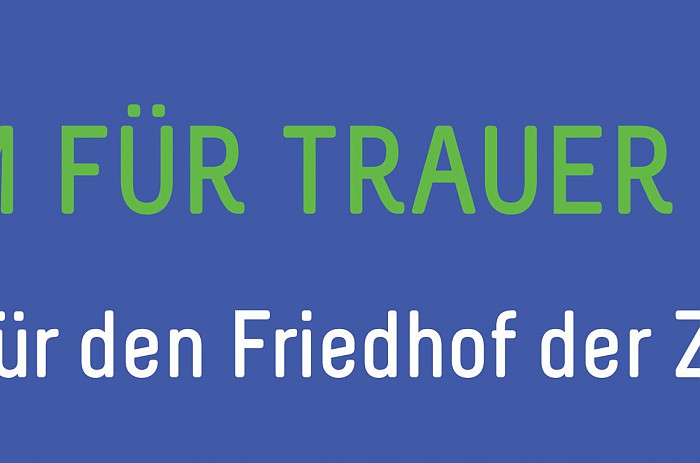 The winners of the competition

Cemeteries need to be rethought in many ways. Current social developments in dealing with dying, death and mourning form the basis for new places and spaces and their spatial-architectural framing. Therefore the competition "Raum für Trauer" asked for the cemetery of the future. What could a cemetery look like that could better meet the needs of mourners and take into account the basic psychological functions of a burial site? What could such a cemetery accomplish – not conceived as a place for the dead, but as a space for the living? Which design and which offers could help to give mourning an active place in society again and thus break the taboo on death?

The aim of the competition was to develop proposals for the conception and design of spatial situations at the Ohlsdorf cemetery that can facilitate individual or communal rituals and actions of public, but also personal farewell. In this sense, the competition was looking for innovative, experimental and daring concepts for the cemetery of the future.

Participants should design situations within a superordinate structure that can be designed, perceived and handled in different ways. These places or spatial situations should make mourning actions of different individuals and social groups possible. The social space structure should be composed of private, community and public areas. A stay at the place of burial should also have a healing and positive effect on people. Contributions were expected from the participants of the competition which deal with the following levels in a focused or integrative way:

This was particularly successful for the three prize-winning works, according to the jury.

At the same time, it was noticeable in the 45 submissions that the focus was less on the conception of the concrete place of burial and its significance for a successful mourning work, but rather that the students dealt more with the general and public areas of the cemetery. How little knowledge of the significance of mourning for the functionality and significance of the cemetery has been incorporated into the designs corresponds to the little developed awareness of society as a whole that the grave site and the active actions at it play a central role for the relatives in processing an existential experience of loss. Knowledge of the significance of psychodynamic processes in the context of individual mourning work should be taught more at universities so that this knowledge can be incorporated into the planning considerations for cemeteries as metastructures and burial sites as microstructures. Every citizen knows what the functions of schools, hospitals or hospice facilities are, but there is widespread ignorance of the individual and socially relevant functions of the cemetery. It remains the central task of all associations, societies and trades involved in cemeteries to communicate this to the public in all clarity.

Here you will find the project "Space for Mourning"

The jury gave the following reasons for the individual winning designs:

Samuel Schubert: Wants to break with the usual conventions of grief management in moderation. A celestial enclosure creates reflection and tranquillity to commemorate the deceased.

"A different way of grave design shows this concept, which was developed parallel to the inventory. A superordinate grid with 717 oaks enables the user to take action at each grid point and to live out his or her grief individually. The highly participatory and collective character provides a regulated framework for any kind of individual intervention and leads to a gradual transformation of the cemetery over the years. A more detailed draft would be desirable, but the concept is nevertheless forward-looking and feasible". 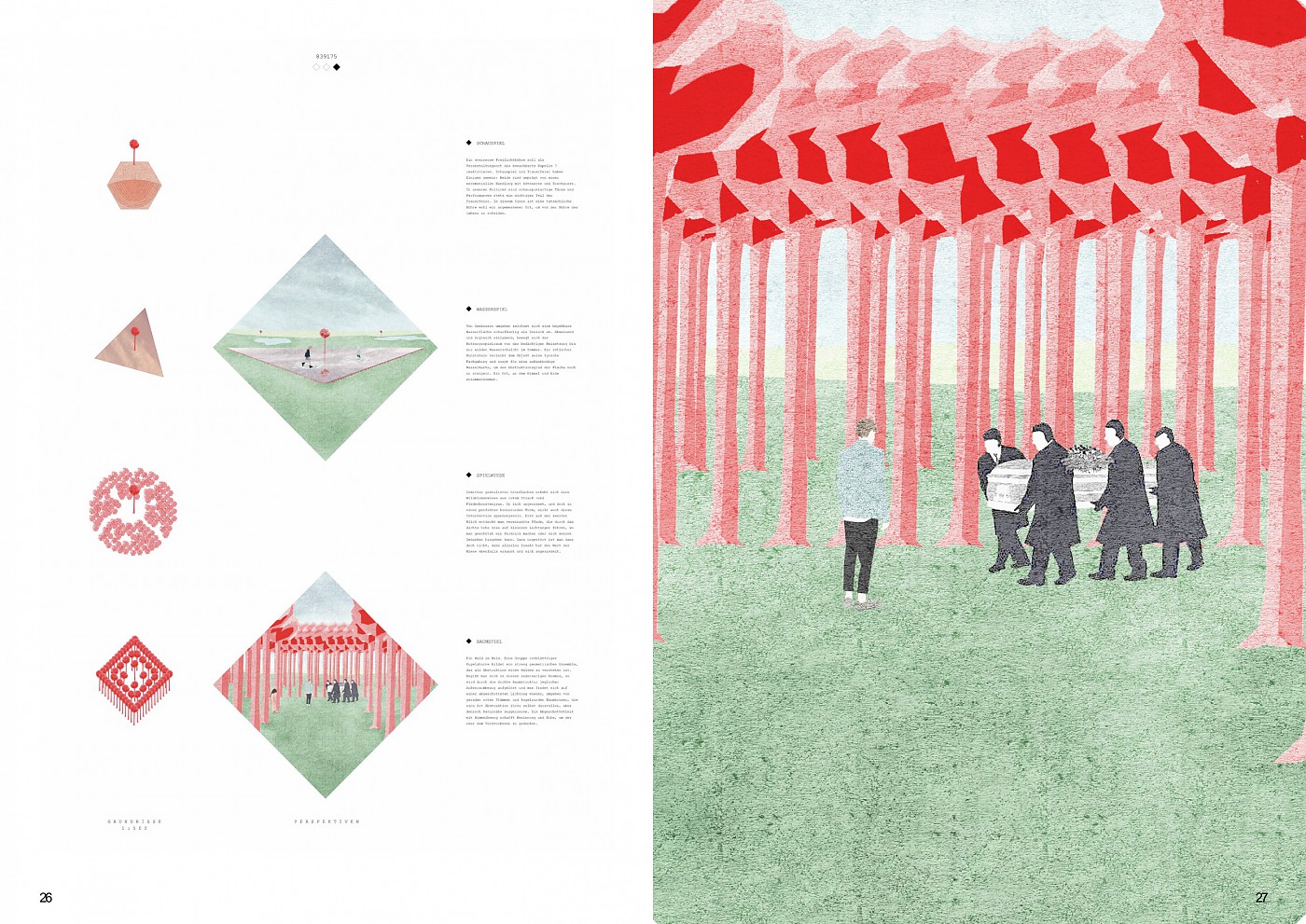 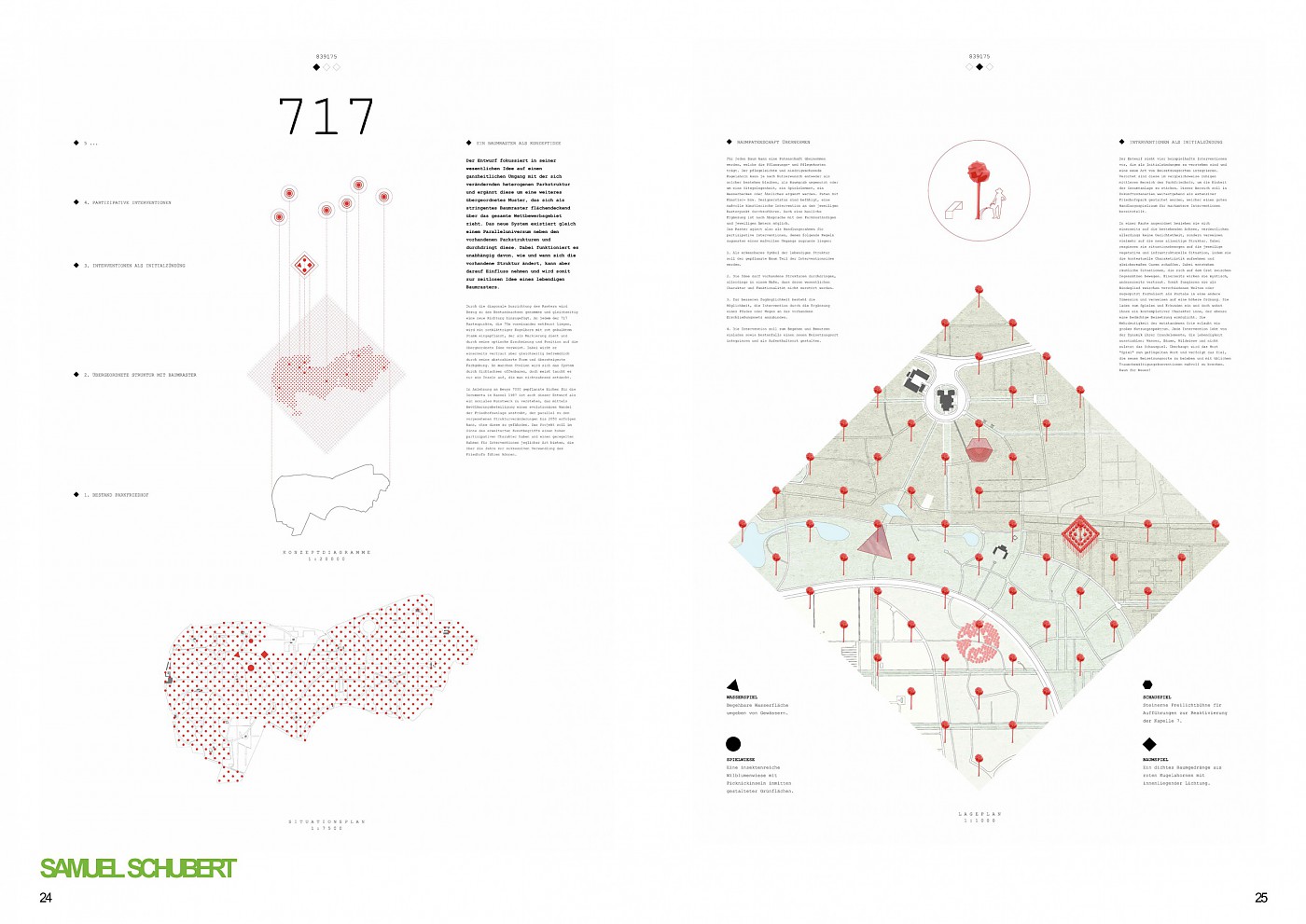 Ricarda Leandra Bock and Emily Kern: The concept "Weg für die Lebenden" ("Way for the Living") ties in with current structures and offers surviving relatives a natural and beneficial space for mourning, remembrance and recreation.

"A wooden elevated path along the pearl ponds of the Bramfelder See offers nine participatory mourning rooms for individual and communal rituals. Interactive, open offers challenge the mourners to design the room individually and personally, without pretending to have a specific mourning process. The path is a geometric feature in the otherwise organic space and runs like a red line through the cemetery. It symbolizes the path of mourning, which offers the freedom for one's own reflection. However, the high trail is particularly difficult for older people or people with a fear of heights. In reality, the concept is easy and flexible to implement". 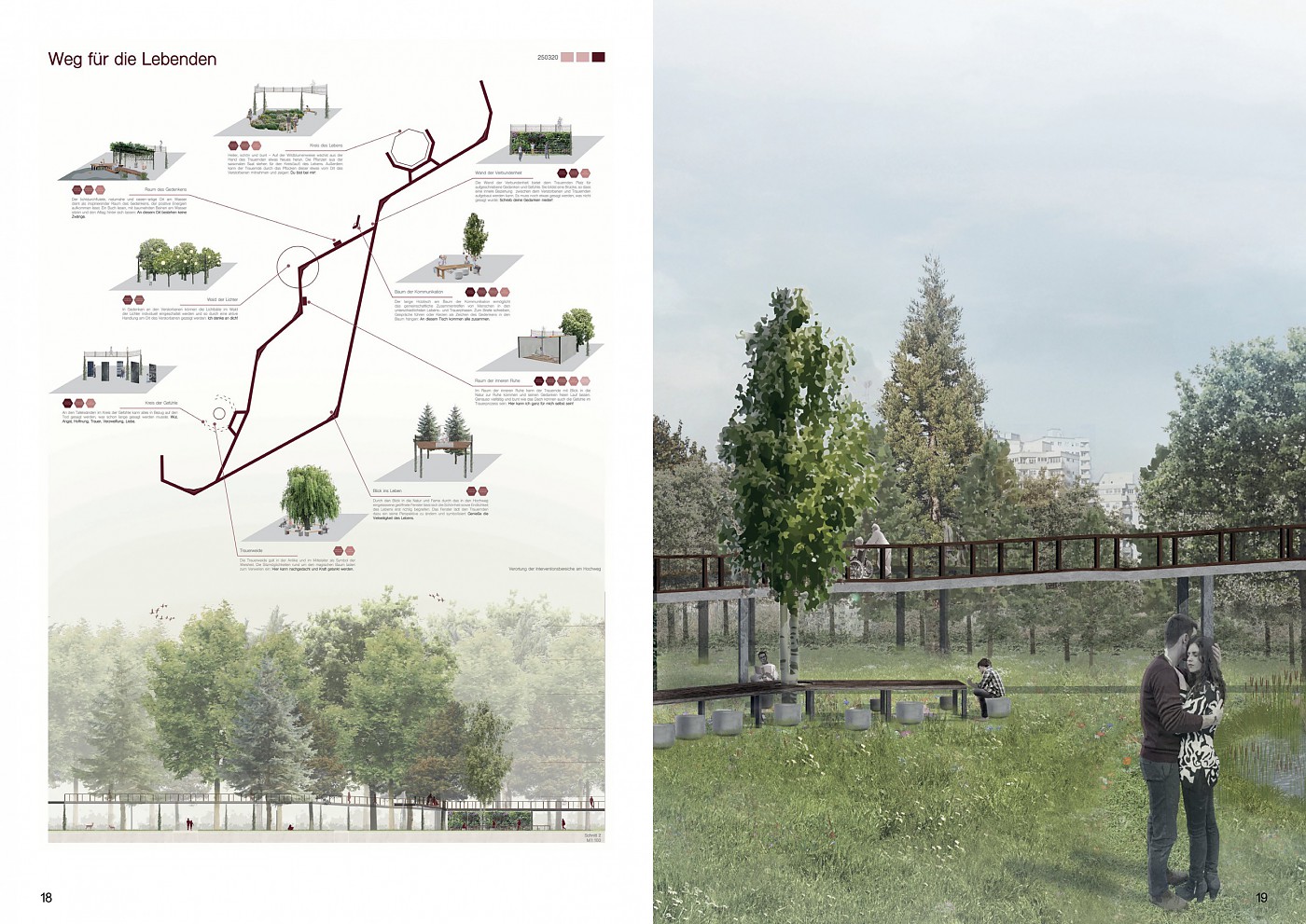 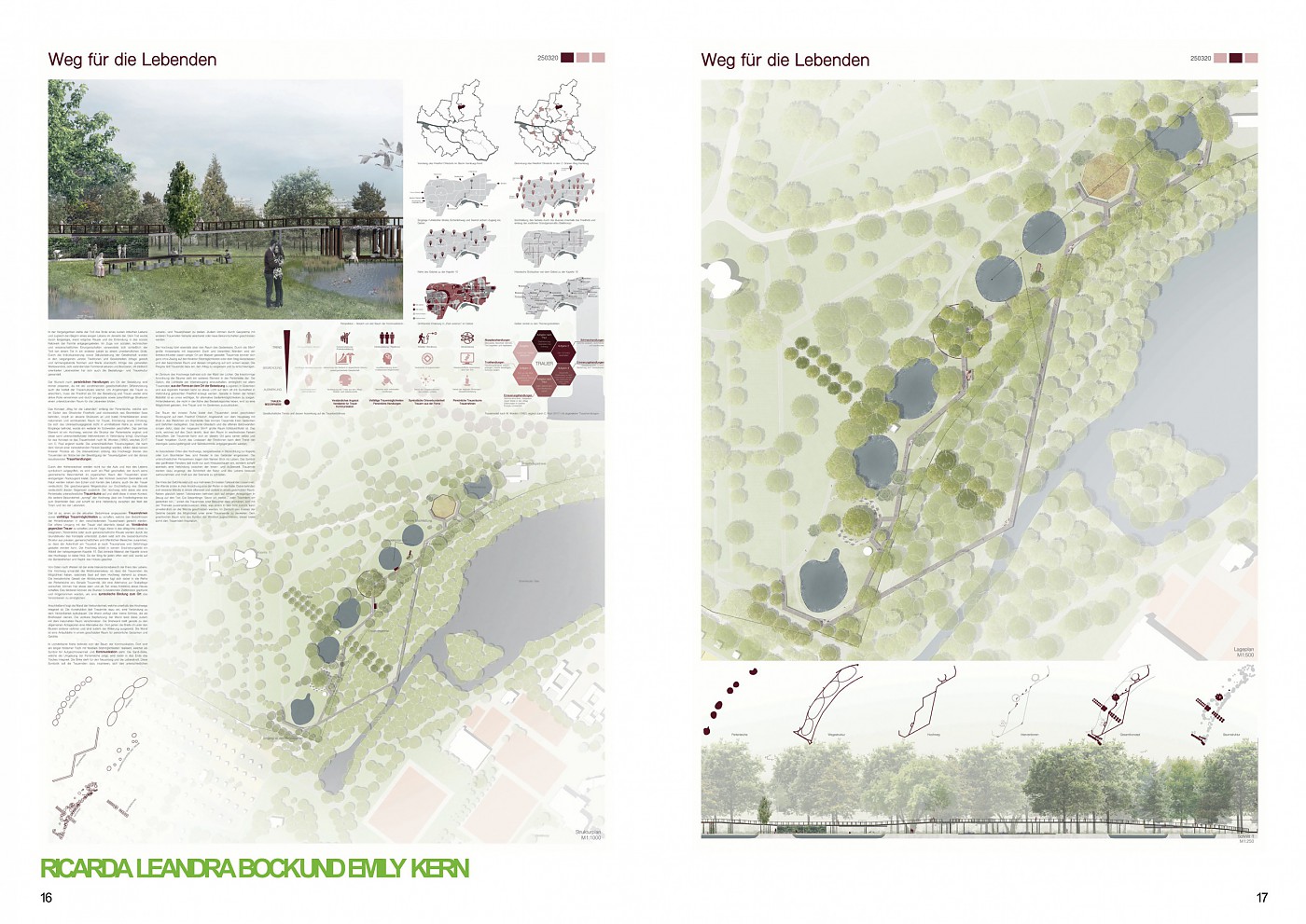 Anna Kopácsi: The Ritual Path of Mourning should help to find among the variety of spiritual acts of personal farewell the individually suitable one. The buildings along the path offer places where community and individual rituals can take place.

"Eight walk-in pavilions for mourning are distributed along the linear axis of the historic Linne section like monolithic sculptures in the landscape. By hollowing out the massive volume, individual and collective offers for new rituals are created. The work deals with the landscape of the entire cemetery, and is an iconographically well implemented mourning concept. The different architectural atmospheres of the respective cubes, which are defined by different proportions, staged views and materiality, are positive. However, the given use of the cubes gives little room for mourning. Possible fears of the users of the rooms about the threshold also make the intended use of the rooms more difficult: "The visitor is forced to enter in order to be changed. 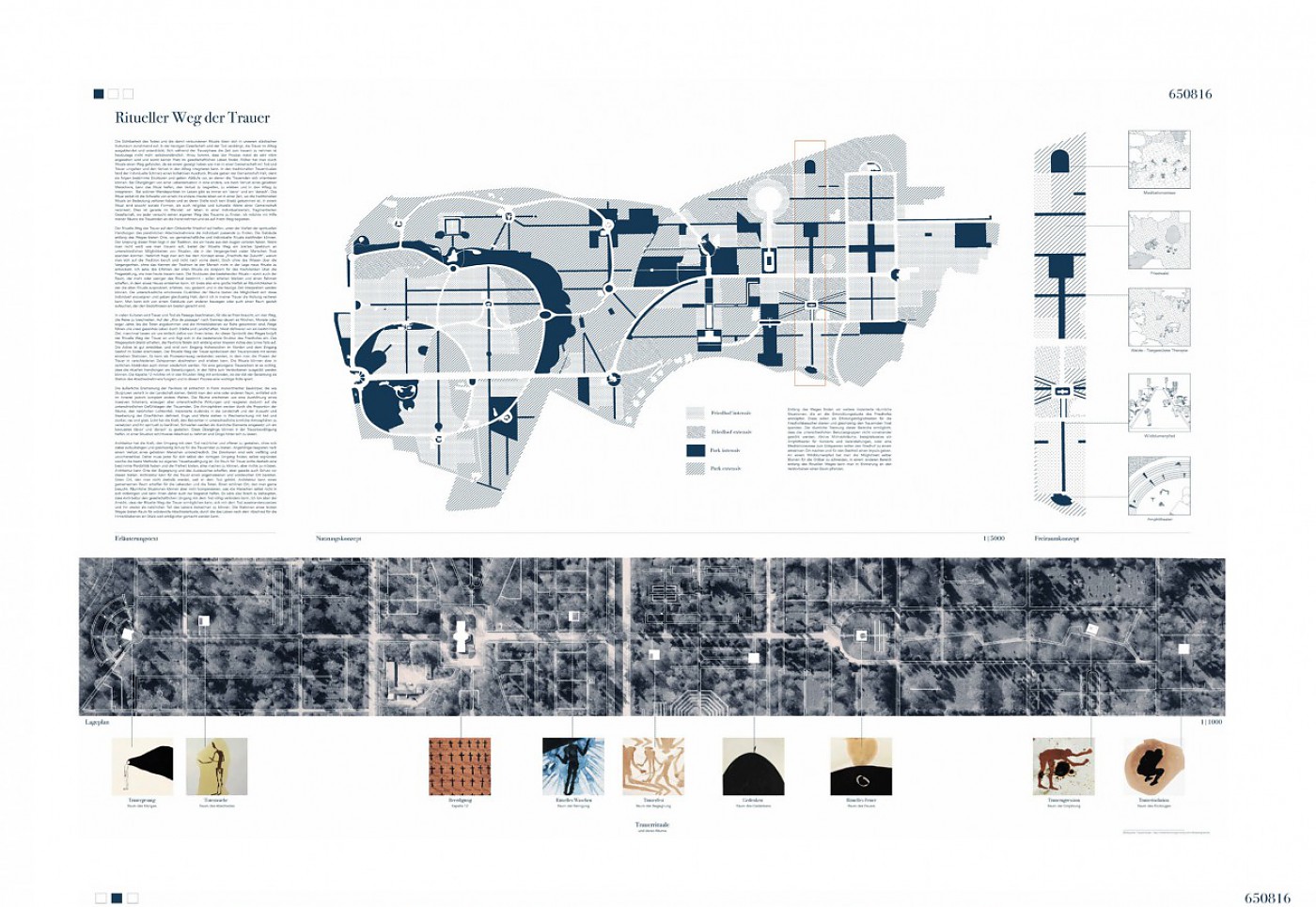 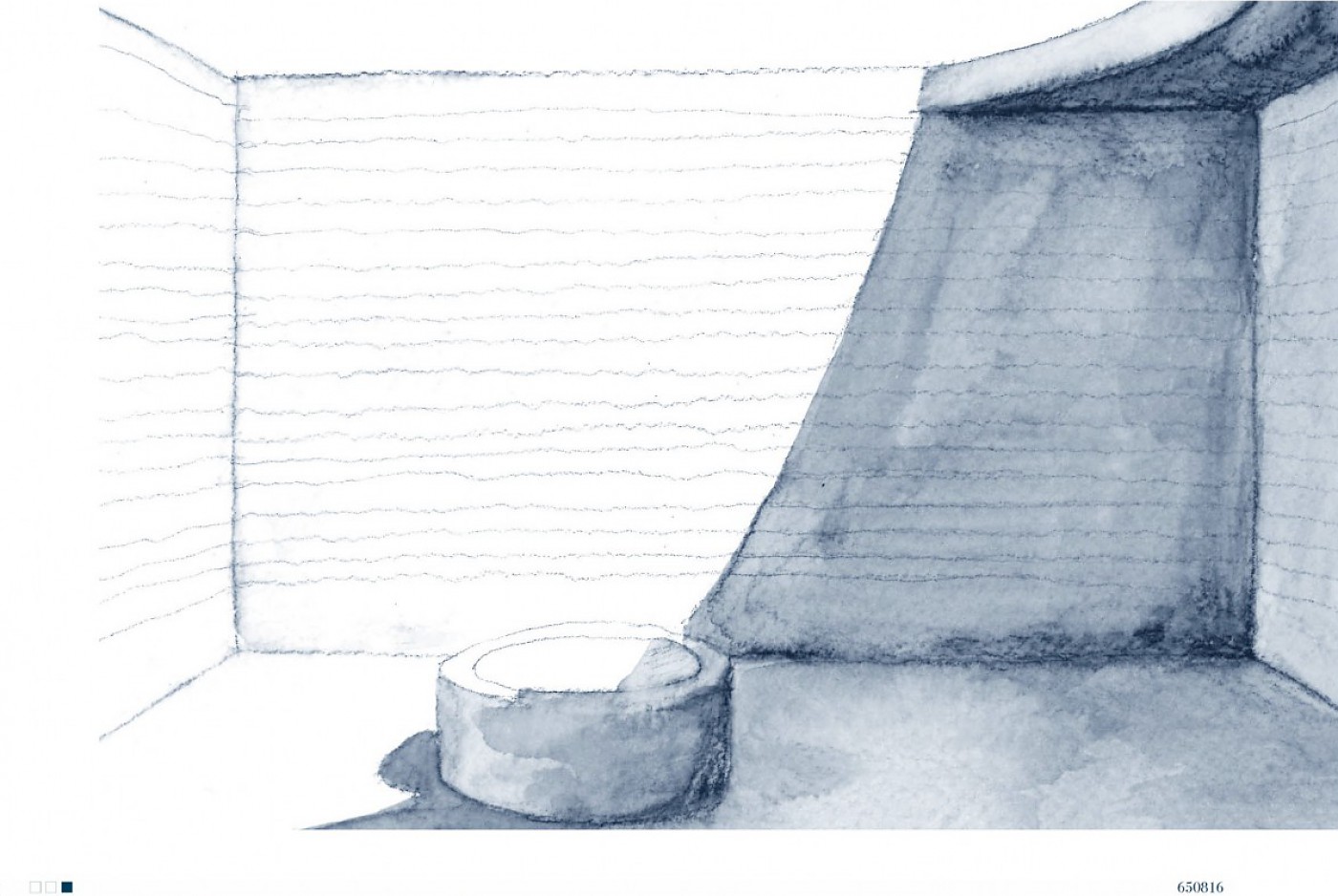 Some impressions of the submissions

You will find all contributions as PDF-Download under "Participants" 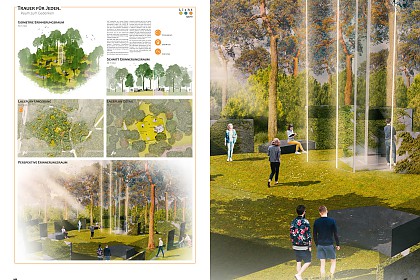 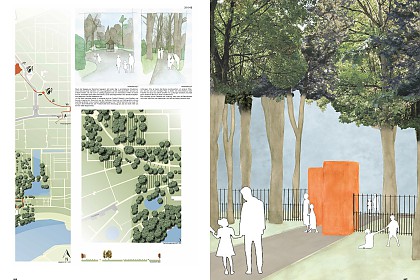 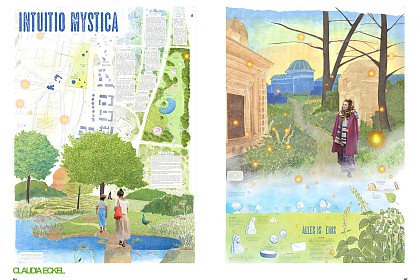 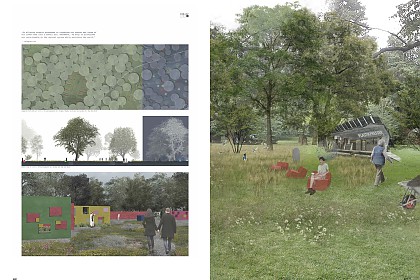 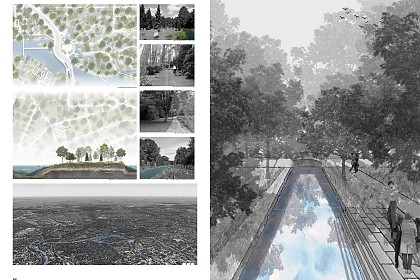 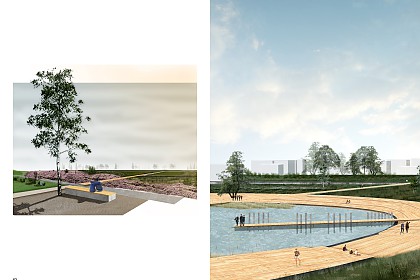 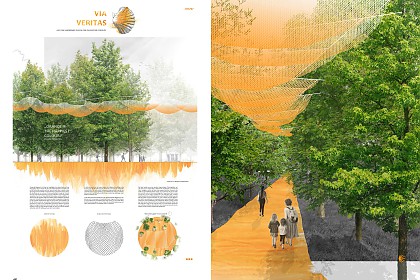 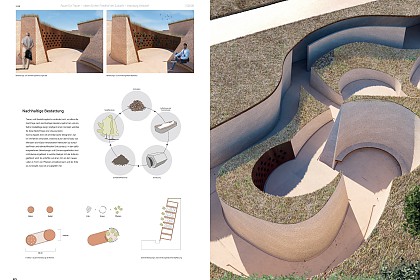 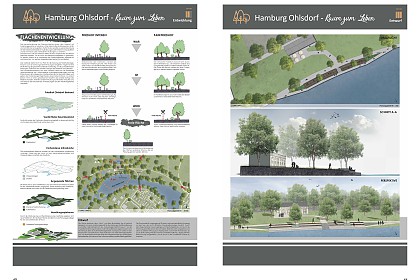